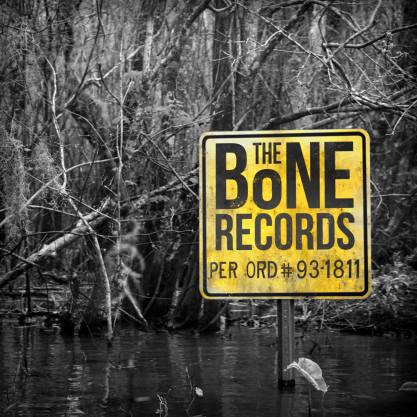 check out this review for the opening track:

“It’s not just the insistent riffs, the onrushing drums, the incandescent harmonies. Who couldn’t love a band that marries Hughie Green and the Bard in one couplet, the Carpenters and the Archdrood Cope himself in the next? You want a sharp musical thrill, it’s here. You want street philosophy, check out the refrain and the subterranean sense of environmental apocalypse. ‘Would you say to Joan of Arc inside her fire, “Come on girl, take me higher!”?’ We would, we did and, forgive the pun, but we really DIG the Bone Records and you will too!”

(So enigmatic in fact, vive le rock magazine, that they don’t even know where their singer is… somewhere between Bruxelles and Seoul, apparently…)

New album is currently being recorded at Brighton’s legendary Audiobeach studios. The band promise to capture the zeitgeist with a banquet of post-punk urgency, tectonic grooves, incendiary lyrics, swampy blues and garage-fuelled riffs. Expect the album launch very soon. Expect also to be mildly underwhelmed. But heck, you never know!!