The final film the Ghost shared in a classroom was ‘Into the Wild’, Sean Penn’s 2007 adaptation of Jon Krakauer’s book of the same name, which documents the true story of Chris McCandless. Frustrated with the limitations and vanities of society’s preoccupations, as exemplified by the materialism and unhappiness of his parents, McCandless abandoned civilisation to measure himself against the wilderness, a quest for enlightenment inspired by his favourite transcendentalist authors (Thoreau, Tolstoy, Jack London etc.)

I think my students enjoyed it, although ‘enjoyment’ is perhaps too shallow a word. They didn’t say much. Were they expecting a Hollywood ending? Were they waiting for the  final reveal? Isn’t it okay for a film to leave you frustrated and full of questions?

It’s rare to encounter a movie which so provocatively skewers our existential dilemmas; that simultaneously romanticises and deglamourises both hero and vaunted ideals. Even rarer to encounter a character who is admirable on so many levels, perhaps even CORRECT as well, and yet is fundamentally flawed. That for all of his courage and convictions he has overlooked the most important human realisation: that happiness is only real when shared. 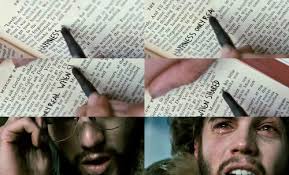 Most of all, the film is beautiful. Rarely has America looked so good, and that’s saying something in these days of the Bald Eagle’s decline into cartoonish abomination. Populated as much by the people McCandless meets and touches – wrenched by their own conflicting yearnings, and struggling for meaning amidst the tragedy that characterises our endless changing – as by the enormity and spirituality of the continental landscape across which Alexander Supertramp’s pilgrimage plays out, from the canyons of the south to the wilds of Alaska.

In the end he reaches his Magic Bus, a destination we will all travel on from alone one day, the question being whether or not we will leave in a manner of our own choosing, and what manner of bus it will be. Sure, I crowbarred in a clunky metaphor there, but any viewer will conjure with these ideas in a more elegant and profound manner than these few words can convey. A meditation then upon life and death, and then some.

And, of course, there is Eddie Vedder’s tremendously apt soundtrack, simultaneously sparse yet powerful, simple yet so achingly epic. Magnificent. The man has a voice; the songwriter an instinct for the heart of the matter.

I love this film. Enjoy.